Families with an increased risk of melanoma

Familial Melanoma: families with a tendency to melanoma

In approximately 5% of melanoma patients, the melanoma has occurred as a result of inherited high risk genetic mutations which increase the risk of melanoma. These families typically have 3 or more melanomas in the family especially if the people with melanoma have had more than one cancer.

Of these 5%, in about half of the families the inherited genes are high risk, somewhat similar to the BRCA1 genes which increase the risk of breast cancer in other families. The most common of these genes is a gene called CDKN2A and in families with mutations in this gene, the increased risk is mainly for melanoma of the skin. In some parts of the world there also seems to be an increased risk of cancer of the pancreas or other cancers associated with smoking such as cancer of the larynx. The real risks of different sorts of cancer in families carrying these genetic mutations is however unknown and we need to establish that in order to advise patients about the need for screening. It is an important aim of MyMelanoma to establish those risks, something that can only be done by working together internationally. Collaborating will allow us to collect enough data that we are confident that the estimation of risk can be relied upon. A second gene CDK4 is also mutated in some very rare families and these mutations have a very similar effect on cancer risk as CDKN2A.

There are other genes which when mutated increase the risk of melanoma but these are very rare indeed. Genes such as CDK4, POT1, TERT and BAP1 which can be found in only around 1% of families prone to melanoma. Finally there are families with multiple cases of melanoma in which no mutation has yet been found.  The GenoMEL consortium www.genomel.org. continues to work on trying to identify additional rare genes in families. Families carrying these rare genes usually have experienced 3 or more cases of melanoma in the family or melanoma and a number of cases of other cancers eg pancreatic cancer.

Julia Newton-Bishop was recorded talking about melanoma in families at the UK Melanoma Patient Conference in 1918: cut and past this into your browser to see this video https://youtu.be/d5APqaDHnvM

What should we do if we think our family might have a high risk melanoma susceptibility gene? How can we tell?

If you have concerns then the best thing to do would be to gather information together about your family's history of cancer then talk to your family doctor or hospital team. If they suspect that you might indeed have such a gene in the family then a referral to a clinical genetic service for counselling would be indicated. The genetic counselling service would review the information first and may then check some of the details and then will advise about risk, whether a genetic test would be helpful and screening.

The geneticists will want to know about:-

More information is available on the GenoMEL web site, that of Cancer Research UK and the NHS has advice on gene testing (search on predictive tests for cancer risk genes - NHS).

If my family carries a high risk gene, are we at increased of other cancers as well as melanoma

Although some families with CDKN2A mutations appear to be at increased risk of pancreatic cancer and other cancers caused by smoking, the real risks are unclear. Some of the rarer newly identified mutations in genes such as POT1 do appear to be associated with significant risk of cancers as well as melanoma but the data are insufficient to guide screening. We need to better understand risk.

Answering this question is MyMelanoma's Aim number 1:to carry out research by collecting information from people with identified inherited mutations in genes such as CDKN2A, CDK4, POT1, TERT and BAP1. The aim is to establish the risk of melanoma or any cancer through life, in mutation carriers.

Familes with melanoma in whom mutations cannot be found

In some families even with 4 or more melanoma cases a causal mutation cannot be found. This is especially so in hot countries such as Australia. Research continues to determine if mutated genes can be found.

In many families with 2 or 3, it seems likely that the increased risk of melanoma in these families has occurred because they have inherited multiple low risk genes eg the genes for red hair and those associated with having many moles. It seems probable that these families could reduce their melanoma risk considerably by avoiding sun burn but research continues in the GenoMEL research groups.

What will MyMelanoma do to research melanoma in families?

The MyMelanoma team will work with the international melanoma genetics consortium called GenoMEL www.genomel.org in order to produce better estimates of risk of cancer in mutation carriers. This information is very important to families in terms of counselling about risk and in order to establish screening in order to identify cancers early. It is extremely difficult to produce accurate estimates of risk especially for the very rare mutations and only by working internationally can we make progress. 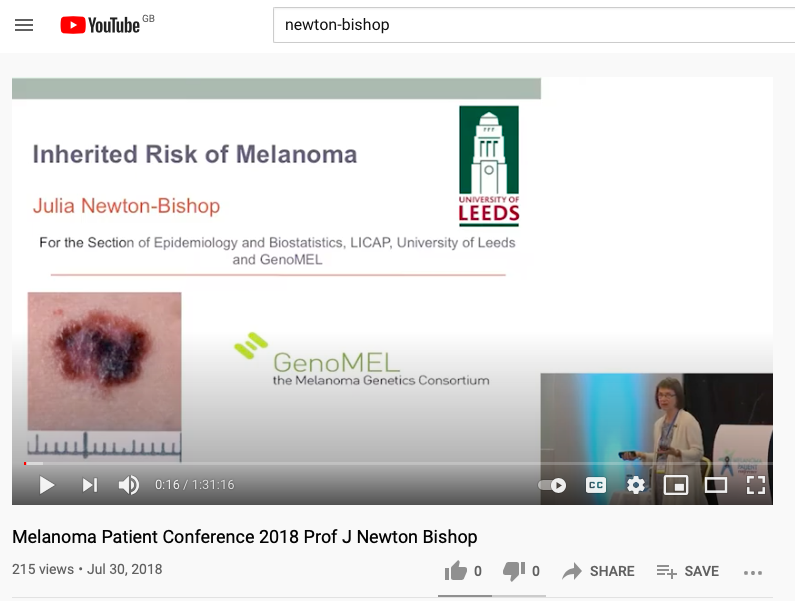